The Australian Top Doorslammer Championship will accelerate back on to the national scene with the announcement that the 3500hp, 400kmh supercharged sedans will be travelling around the country alongside the Burson Auto Parts Australian Top Fuel Championship.

Beginning at Nitro Up North at Darwin’s Hidden Valley Drag Strip on June 17 and 18, 2022, the series will closely follow the Top Fuel dragsters schedule, with just a few variations. Alice Springs Inland Dragway, Heathcote Park Raceway, Perth Motorplex, Willowbank Raceway, The Bend Motorsport Park and Sydney Dragway will all feature, before the series final takes place at the 2023 running of Nitro Up North once again.
The championship will be the most diverse in the history of the class, putting Top Doorslammers in front of more Australians than ever before. Australian Top Doorslammer Association president Matt Abel said it marked a new era for the thrilling category, which is as well known for its wild moments as its five-second quarter-mile passes.
“To return to a true national championship has been a long time in the making,” he said. “To be able to compete around the country is why many of us do this, and I personally can’t wait to visit all of the tracks on the calendar.
“The entertainment provided by Top Doorslammers always has spectators on the edge of their seats. The field is full of unique cars that are visually spectacular and have performance to match.”
Reigning Australian Top Doorslammer champion Daniel Gregorini will be among those chasing the series across the continent. He said the combination of Top Doorslammers with the ground-shaking Top Fuel dragsters would create a world class drag racing show.
“The festival atmosphere of the Burson Auto Parts Australian Top Fuel Championship is setting new standards on what the sport can be in Australia,” he said. “We were able to run alongside those guys for the ANDRA Grand Finals and I think together the two categories provided an incredible display for motorsport fans.”
The live shows will be complemented by an extensive broadcast program, to take drag racing into the homes of more Australians than ever before. All rounds will be broadcast live on Facebook and 7plus, with a post-produced highlight package to be broadcast on 7mate and Fox Sports, as well as receiving international distribution on MAVTV.Australian Top Doorslammer record holder and many-times champion John Zappia said the professional level of the TV would present huge opportunities for racers and sponsors alike.
“The more eyeballs we can have on our sport the better,” he said. “There’s nothing like being at the track, and we hope to see thousands of spectators at every round, but when we make it easy to follow the action no matter where you are, that is going to result in a massive increase to our fan-base. We’ve seen how Formula One has exploded in popularity since they made the sport more accessible, and we want to do the same thing for Top Doorslammers.”
The Australian Top Doorslammer Championship will run sanction-independent, with racers simply adopting the sanctioning body of each track. 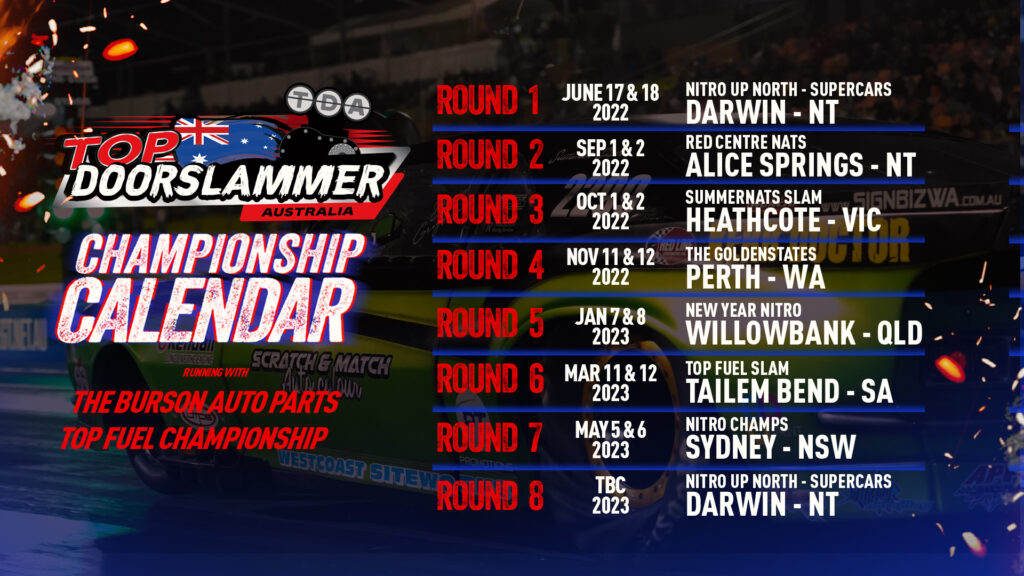